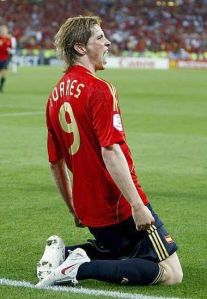 When teaching physical descriptions the only way to add an element of culture is to describe a famous person from the target language community. I chose Fernando Torres given that the World Cup is coming and introducing him now to my Year 7 group will allow me to keep returning to him as we move into further topics. During the World Cup I will want to do lots more focusing on the Spanish team. In the meantime, the PowerPoint shows Torres with different hair styles and eye colours. In introducing Torres I am going to show the NIKE advert below to show how he plays for Liverpool and I want to introduce the word “el niño” to the group (Torres’ nickname).